In this modern world, sometimes we think that everything has already been invented. And then there is someone who invents something – solves a problem that we thought was just something we had to accept. Bruna Jones is someone like this. Not only did she invent an embroidery frame and built up her own embroidery company Easy Street Crafts but Bruna has some incredible stories up her belt.

Hi Bruna, I’m glad to have you here! Could you give us a short introduction so my readers know who you are?

I’m a first generation American, born in Dayton, Ohio. Both my parents were from Italy. I was artistic, studied art, and worked in an advertising agency. After I married, my husband and I moved to Ventura, California where our four children were born. They gave us six grandchildren.
For a number of years I belonged to the Embroiderers Guild of America. My stitchery friends and I would travel every month to the Los Angeles Embroiderers Guild meetings where they had classes and speakers, often from England, who were tops in their field. We would return home so excited.

But one of the most fun results of my working with crafts and needlework was that for five years I taught crafts on Holland America’s World Cruises. My husband was my assistant and we cruised around the world for three months each year. Even the men enjoyed stitching.

How did you learn embroidery?

I started when I was seven or eight years old. Living close-by was a girl two years older than I. When she was a baby, she had spinal meningitis that left her deaf, dumb, and crippled. She attended a special school where she learned a number of needlework activities. On summer afternoons we sat on her front porch and she taught me to embroider, to knit and to crochet. We communicated easily by mouthing words and doing lots of hand motions.

Your embroidery frames are very unique, how did you come up with the idea?

Years ago when my younger daughter was in Camp Fire Girls, I taught her group different embroidery stitches. Once a week they would come to our house, sit around our round oak table, and learn to stitch. Each girl had a doodle cloth on which she practiced different stitches.

The goal, after several weeks, was to create a design and then stitch it using the different embroidery stitches they had learned. In order for the girls to be creative, I had a friend make simple wooden frames that measured 8” x10”. Then I stretched woven fabric onto each frame by pulling it tight and stapling it on the backside of the frame. After finishing, I muttered, “Why doesn’t someone invent a square embroidery hoop?” – and that’s how the idea started. I still have my daughter’s stitchery and looking at it, I’m amazed at how creative she was using the different stitches.

What was the most challenging part of designing and producing your own embroidery frames?

When a prototype was made, I saw that the outer part could be made to look like a frame so that the “square” hoop could be used for stitching and also for framing. After that I drove all over southern California to interview several injection mold-makers. Then, after the first frames were made they had a highly polished look that could scratch easily. So I had the molds etched to have a subtle wood-grain look.

Sometimes, things go wrong in embroidery. Do you have a funny story to share when something went an unexpected route?

Many embroidery people are struggling with storing their embroidery threads. What’s your system (or non-system)?

Many years ago, one of the women’s apparel stores in town went out of business and auctioned off all of their furnishings. I went to perhaps find some Christmas decorations. I ended up with several large pieces of walnut chests. We turned our garage into a family room surrounded with these chests full of drawers — lots of drawers full of yarns, embroidery threads, fabrics, and craft items.

What is your favorite part of the embroidery process from start to finish and which do you like the least?

My favorite part is the excitement of starting an idea. When I’m working on something, I never want to stop. Maybe a disappointment occurs when I’m not satisfied with the piece and finally decide to start over or to discard it.

Which embroidery project was the most challenging one you have ever encountered?

An Embroiderers Guild class project with gold and silk threads was challenging. It was a complicated design that I wasn’t sure I should spend my time working on it. After the class, I put it aside and never finished it.

There are so many embroidery techniques and materials out there. What would you love to try out one day that you haven’t done yet?

You know, I’m almost 87-years-old, and I’ve done a lot in my life-time. For years I was a quilter. I designed and quilted a nautical themed queen-size quilt that combined appliqué and embroidery. Now I‘m beginning to realize that I have to start thinking of down-sizing and giving away materials and equipment that I could never part with before. And most of all I have to try to sell my business to someone interested and enthusiastic.

What piece of advice would you give to your younger self who has just started embroidering that you wish you had known back then?

I enjoyed learning and exploring the many stitches and working them in different threads. Had many doodle cloths. I wish I had been more serious and spent time designing and producing finished pieces of embroidery instead of just playing with the stitches.

Where can we find your embroidery frames?

Do you want more tips and tricks on hand embroidery?

Join the Tutorial Alert! It is a biweekly newsletter that contains information about new tutorials & articles on Pumora, tips & tricks, and promotional content like new embroidery patterns or special discount codes.

Exploring the realms of hand embroidery brings me so much joy and on Pumora I love to share my knowledge and insights with you. I'm Anne and I live in rural Germany with my family and our 4 crazy cats. 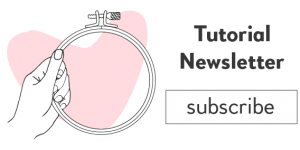 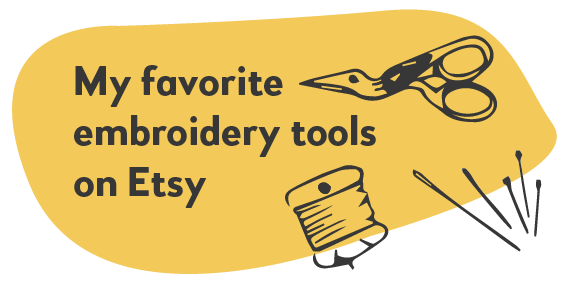